Denise Eide’s Uncovering the Logic of English made it to the top of my to-be-read stack because I wanted to see what she had to say before I get started with real reading instruction for my newly-five-year-old daughter.

Thankfully, my conclusion confirmed on every page was that the best thing to do was continue with TATRAS. TATRAS might not be as thorough in spelling rules as The Logic of English, but it teaches the big ones in the context of reading rather than writing (the gigantic rule & bicycle rule for hard and soft sounds, the cake rule, etc.), does teach vertical phonics (all the sounds of a letter or multi-letter phoneme at once), and does teach almost all the multi-letter phonemes she lists (and the ones it doesn’t that she points out are ones I’m dubious are needed like bu for buy — in TATRAS buy and guy follow the uy phoneme).

Denise Eide has her own phonics, spelling, and handwriting program: Logic of English Essentials that looks more like Wanda Sanseri’s Spell to Write and Read than like TATRAS (not to mention the fact that TATRAS is half the price of them both). But I’m not convinced it’s necessary to tie writing into phonics (though even TATRAS has instructions for doing so, it’s just not essential to doing the program). At least in our house, phonics and early reading instruction happens in 5-10 minute sessions on the couch two or three times a week with casual reinforcement as opportunities arise in normal life. For us, TATRAS isn’t a program we follow so much as a tool I use to remind myself of the phonemes, phonograms, and rules so I can teach in bits and pieces as we go along, using the actual TATRAS binder as needed. I teach (or, at least, have taught) reading by feel rather than by system. 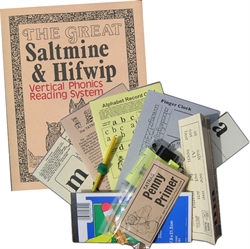 However, I now can see from Eide’s book that this approach has worked for me because I am intuitive and my oldest two were intuitive (rather than logical) learners. They learned to read without much work or agony and could read fluently before I taught them all the phonograms or rules. It is the literal-logical thinkers, Eide says, who suffer the most from poor or incomplete phonics instruction. I have no idea what my next three reading students will be like, so I am glad for the reminder that vertical phonics and phonogram instruction are effective. If I end up with a literal-logical child (heaven help me), my current materials will work, but I will likely have to teach them more thoroughly and completely, not leaving loose ends as I did with the older two.

Spelling and Intuitive Readers and Us

Half of the book is a thorough explanation of the spelling rules of English that actually have very, very few exceptions. As I read through this section, I realized just how much of an intuitive reader I was (and I’m a decent speller), because I couldn’t have told you most of them, but once I read it, my response was, “Well, yes, I know.” I was a late reader, so my mom had tried multiple phonics programs out on me (there weren’t as many 25 years ago, either) and she didn’t find TATRAS until I had finally learned to read (at age almost 8; it wasn’t that it didn’t make sense, I just could not blend and did not “get it” at all. Once it clicked and I “got it,” I was reading at a 5th grade level within a year. It was an intuitive switch, not a learning of rules, for me). But I heard TATRAS lessons every few years thereafter and was familiar with the phonemes by that exposure. And my mom used Bob Jones Spelling, which arranged words according to a rule or pattern to be learned, so even though I didn’t learn explicitly the rules Eide outlines, I learned words grouped together by patterns and intuited those patterns. Plus, my mom clearly articulated words even sometimes to exaggeration for reading and spelling, and she insisted upon clear articulation (or tried to). Eide says clear articulation of sounds is key to learning to read and spell, both to know what sounds a word actually has and as a memory aid as to how to spell words (I still say Wed-Nes-Day to myself every time I write it, out of habit, even though I never misspell the word, because I always did when I was young; I pictured it as being a day about weddings, and that made me happy).

Now, though I did Sequential Spelling inconsistently for a year or two, I gave it up as of low priority when things had to give. For this school year, I’ve assigned writing and we work on spelling as it comes up. The boys rarely misspell a word and usually know when they don’t know how to spell it. So they’ll ask, I’ll tell them, and they write it correctly. They got their father’s visual memory, and their language intuitiveness is also evidenced because they make good guesses (not strictly phonetic attempts, but analogical – this word is probably like this other word).

So, though I don’t see any reason to teach them as if they needed the literalness and thoroughness that a literal-logical student would need, I also think perhaps showing them these rules might be a useful “covering of the bases” to clear up any misunderstandings or problematic pattern-finding before it gets too entrenched. I am thinking about starting next school year with a six-week spelling workshop, based off of the rules and examples given in Uncovering the Logic of English.

This would also count as handwriting practice, which is an area of weakness here.

Plus, I could use The ABC’s and All Their Tricks when making my list of words, and thus have a use for that handy reference that I like but haven’t needed.

If you did not receive phonetic reading instruction, or are a logical & systematic thinker, or were taught and believe that English doesn’t make sense, then this little book could be a game-changer in the way you see the language and therefore the way you teach it.

Denise Eide also has a vertical-phonic alphabet book, Doodling Dragons I plan on including in our school purchases for next year, as I like introducing phonics when I read alphabet books to three & four year olds. I don’t need the sounds listed, but it includes captions where all instances of the letter are highlighted, and all sounds of the letter are illustrated rather than only the first.