It is no secret that I am in the process of losing baby weight, and maybe even a little extra weight that I need to own up to and stop blaming on previous babies.

One of my tactics is to forgo starch at dinner.

But I still have to feed my family. They are not on a diet, nor do any of them have extra weight to lose. It is simple (more simple than easy) to skip the bread or potato side when we have a meat + starch + veggie dinner. But what about pasta dinners? What about pizza night? What about hash?

Ground beef and potato hash is a family favorite here, and as I’ve written before, it’s never quite the same twice. But every time it includes diced potatoes.

One night, I was already browning the beef and chopping the potatoes before I realized I couldn’t have potato hash for dinner.

As the beef finished browning, I diced up an extra half an onion and added it to a smaller skillet. Then I scooped a portion of beef off for myself from the main skillet and into the smaller skillet. 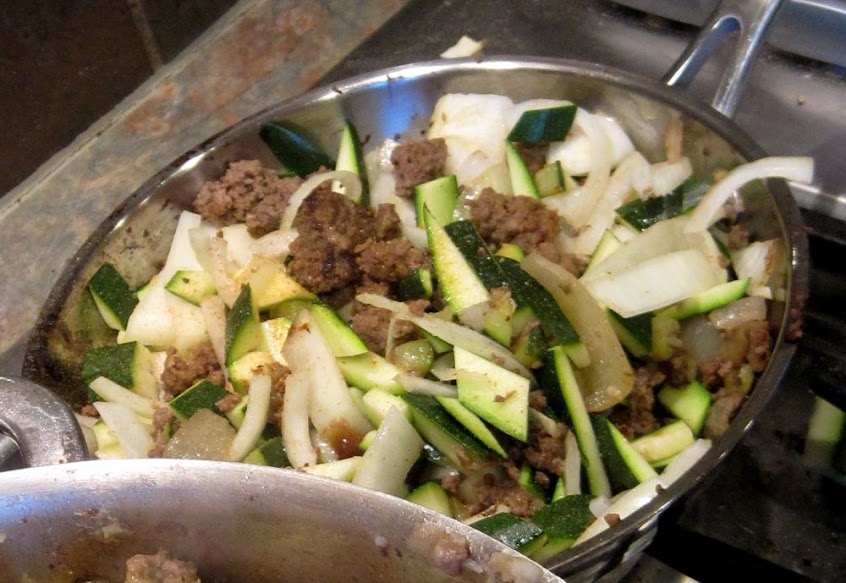 To the large, family-size skillet, I then added the diced potatoes and continued as usual. But to my small skillet, I added diced zucchini.

So, rather than starchy potatoes, I got an extra two servings (at least) of vegetables with the onion and zucchini additions, and because of the vegetable additions ate plenty in bulk so that I did not feel deprived or hungry when dinner was done. I was full enough that there was no lure for bedtime treats to stave off the hollow empty feeling left after a meager dinner.

Honestly, I did not even miss the potatoes, I got in extra servings of vegetables, and I wasn’t left hungry and sad at the end of the day.

Hash will remain a family staple.