As I’ve been pondering plans and ideas for our next school year (only 8 weeks of our school calendar left!), I realized that my oldest pair are headed into later elementary (10yo & an almost-8yo who works hard to keep up with his older brother) while my younger pair are ready for preK work (typical 5yo & a precocious 3yo). So I thought I should jot down what worked with my oldest pair in the 1st-3rd grade years so I don’t forget for the next sets. 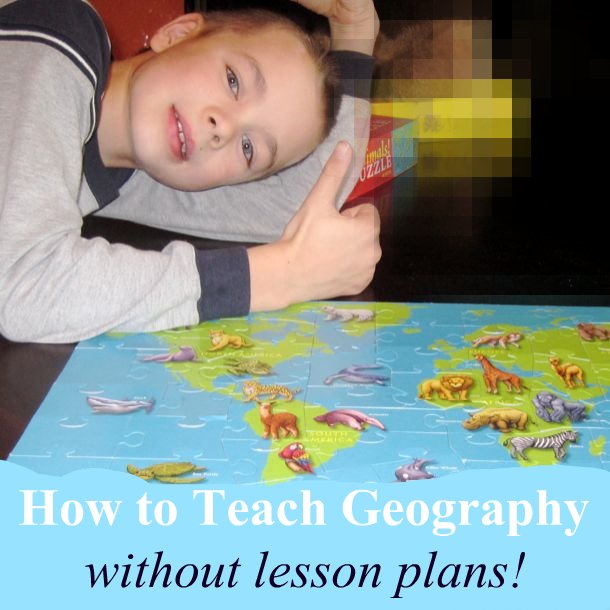 Geography has been an area of surprise success. My boys know by name and location most of the countries of the world.

Their knowledge of geography always startles me, because we haven’t studied geography per se. We have no geography curriculum and I have no lesson plans to teach geography. I have supplied materials, but I have not taught them geography. Yet they know more geography than I do, by far (they have not been hampered by my own lack of geography knowledge or interest).

So here is what we have done that has resulted in strong geographical knowledge:

Informal Geography Tip 1: We have a large world map hung on our wall.

The large wall map in the dining room was not a homeschool purchase or decision. We needed something to fill a large wall, and so for my husband’s birthday before any of our children were school age, I bought him a world map that looks like an old-style map with sea monsters and ships populating the oceans.

With the map hanging there in the dining room, the children started playing several self-created games similar to eye-spy with the map. They ask, “Is Jamaica real?” “Where is it, then?” also, of course, throwing in imaginary country names as well. Often I have to interrupt with “No, Cahm-body-a isn’t real. It’s Cam-BO-dia.”

Of course we also have a globe we refer to and that the children attempt to spin much to fast.

Informal Geography Tip 2: We own and use Geopuzzles.

My parents gave my sons our first couple Geopuzzles for Christmas years ago. Since then I’ve expanded our collection and we now own them all.

The unique thing about Geopuzzles is that the pieces are in the shapes of the countries. So to put together the continents, you piece together the countries themselves. By playing with these countries, my kids know which countries are near each other. As they’re working on them, they’ll be glancing at the box and the puzzle and say things like, “I just placed the Chile piece, so I need to find Argentina next. It’ll be bigger than most.”

Geopuzzles are something the kids pull out on rainy afternoons or work on them while we listen to audio books. If I need to take a sick day, need to take a morning to recoup the house, or have something come up, I can turn on an audio book, pull out the Geopuzzles, and call it a school day.

I think this sort of play is much more valuable than lessons with a curriculum ever could be.

Informal Geography Tip 3: Our shelves are stocked with geography resources.

Though I don’t teach geography formally as a subject, we still have plenty of geography books on our shelves. If the boys want to know something about a country or where something is or what a word like peninsula means, I tell them to look it up. They do, and they usually end up reading much more than the answer to their question. When quiet time is getting a pile of books to sit with for an hour, geography books are some of the staples they go for, even before their reading was strong, because the pictures are interesting to look at.

Some of our favorites are Geography from A to Z: A Picture Glossary, Maps and Globes, and Children’s World Atlas

Geography Songs is an old, simple program that my mother-in-law used for my husband and his sisters. Several of the songs are annoying, but they are memorable and fun.

We listen to them during Circle Time, and sometimes in the car as well, and I have been the mom at Costco with 2 & 4 year olds singing the Continents & Oceans song while being pushed in the cart.

Informal Geography Tip 5: I give the boys blank maps to fill in weekly.

This work does come during “school hours” as an assignment for independent work time. Once a week they fill in the country names on one continent, looking it up in their atlas or on the wall map if they don’t know. After a few times of filling it in with a reference, they can fill in a map about 80% without looking.

That seems pretty good to me.

They fill in what they can from their head, then look up the remaining. They get the map on Monday or Tuesday and have to turn it in completed on Friday.

In addition to these great maps, I also sometimes hand them copies of pages from the Dover Around the World Coloring Book and the United States Coloring Book (I received permission from Dover to make copies for family use only).

With these resources strewn and sprinkled, geography can be a simple subject to cover.

These resources could be pricey if purchased all at once (about $140-$150, more or less depending on how many Geopuzzles you spring for), but we collected them one by one over the course of 3 years, received some as gifts, and bought some used.

Personally, I think it is a bargain for the interest in and knowledge of geography my children have without taking any real energy from me.